A selection of photos from the Scotties Tournament of Hearts. Click the image to see the next photo.
[slideshow=2,600,400]

You are invited to attend a special event at Glenmore!

Friday October 18th will be a special evening at Glenmore. We are combining the first TGIF evening of the year with a Spaghetti Dinner Fundraiser for Team Fournier, our Mixed Provincial Champions who will represent Glenmore at the Nationals Championships in November. Tickets are only $10.00, so don’t eat before you come to the club.

Representatives of Curling Quebec will also be there to present Glenmore with three separate Méritas awards recently earned by our club:

Please be there to help us proudly celebrate our accomplishments of the past year. Dinner will be served throughout the evening, starting at 6:30. We look forward to seeing all our old friends again and starting the new season in style!

The Glenmore Indian Summer is in full swing! Drop by the club this week and weekend to enjoy some early-season curling! Updates are also available to follow the results online!

Congratulations to team Lawren Steventon, Mike Carson, Mac Baines and Greg Sleno for winning the 2013 Masters Provincial title this past weekend. They defeated Team Manseau from Boucherville in the finals by a score of 6-3, with a big steal of 3 points in the 4th end by the Glenmore team being the turning point of the game.

The team will travel to Thunder Bay ON in April where they will represent QC at Masters Nationals!

Congrats team! A 3rd provincial title for Glenmore this year! 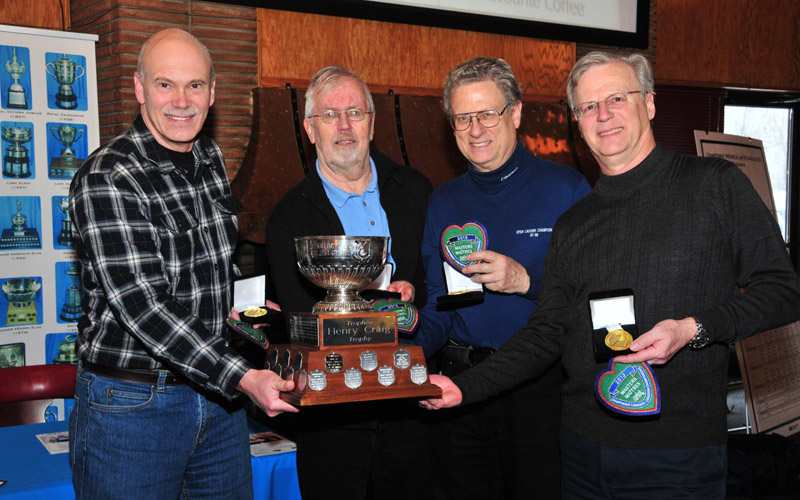 The final Sunday started off with the semi-final with Team Julie Hamel who had a 6-1 record in the round robin (2nd place overall) facing off against Team Eve Belisle who finished with a 4-3 record and needed a tie breaker win to get to the semis. Team Belisle got off to an early lead and were up 7-2 after the 6th end. In the 7th, Julie Hamel made a crucial raise double takeout to score a deuce and trail 7-4. In the 8th, Belisle made a draw to the 4-ft against two to take her single and lead 8-4. Hamel then took 2 in the 9th to set up the 10th end. Lying 2 with her last rock to come, Hamel’s stone came to rest in the 4-ft, to lie 3. Belisle made the takeout and rolled in to score her 1 and win the game 9-6 and secure their spot in the championship finals. Team Julie Hamel, Alanna Routledge, Marie-Pier Cote, and Joelle St Hilaire walked away with the bronze medal.

In the championship final, Team Allison Ross continued their great play during the week and got off to great start by taking 2 in the 1st, and with a Belisle missed takeout in the 2nd, they stole 1 to take a 3-0 after 2. After Belisle took a single in the 3rd, Team Ross came back with a 2 in the 4th, and another steal in 5 to go up 6-1 at the break. In the 6th, with a chance to take 2, Belisle hit and rolled out and took only 1. In the 7th, Team Ross showed some nervousness and missed a couple of takeouts and gave up a steal of 2. They continued to lead 6-4. But they regained their composure and in the 8th they came back with a 3 of their own to take a commanding 9-4 lead. In the 9th end, sitting comfortably with 3 in the house, Belisle removed only one of the stones, leading to another steal of 2, and the championship with a final score of 11-4.
With that, Team Eve Belisle, Joelle Belley, Martine Comeau, and Laura Thomas take home the silver medal!

Team Allison Ross, Audrée Dufresne, Brittany O’Rourke, Sasha Beachamp and coach Glenn Tester win the gold for Glenmore and will represent QC at the Scotties Tournament of Hearts in Kingston ON from February 16 to 24. Have you got your tickets yet?!?

Glenmore Curling Club is proud to have Team Mike Fournier, Alanna Routledge, Mike Kennedy, and Joelle St-Hilaire represent us and Quebec at the Canadian Mixed Nationals!

The event runs from November 17 to 24 at the TMR Curling Club.

Tickets start at $10 for a day pass, and $75 for the week. Would be great if you can attend and show some support!

For the schedule, please consult www.curling.ca and follow the link for the Canadian Mixed Nationals!

Good luck to the team! Bring home a national banner!